Play is governed by the Sporting News’ Official Baseball Rules. CBA Rule Exceptions (on right) are defined for each age division, by season (Spring or Fall).   These exceptions override the basic rules of baseball as defined in the Official Rules of Baseball Handbook.    Additional clarification and exceptions unique to Coppell Baseball Association are identified below:

1.1.   The starting time of the first game for a given day shall be delayed only for the arrival of the umpires (the clock starts for a 6:00 PM game at 6:00 PM, not when the umpire says "play ball").  Delays for warm?up and late arriving players will be "on the clock".  The start time for subsequent games will be no later than 10 minutes following the conclusion of the preceding game, or scheduled game time, whichever is later.  When time expires, the umpire will call “Time has expired”.  The inning will be completed, if required, except as noted in Rules Exceptions by Age Group (listed below):

1.2.   A maximum of two minutes will be allowed between half innings. 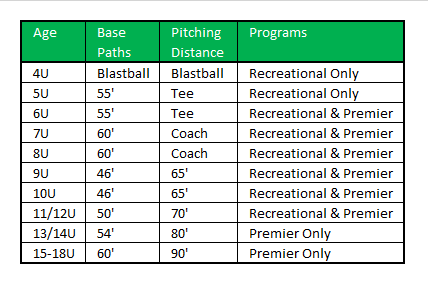 3.2.   No jewelry, except that use to alert a medical condition, may be worn during a game.

4.2.   At least one adult, other than the head coach, must attend each practice.

4.3.   The home team is responsible for keeping the official scorebook and providing one adult to operate the scoreboard.

Rules FAQ
Answers to some of the most frequently asked questions about Baseball Rules. A good place to start.